A guide to Östermalm, Stockholm

During these stay at home times I take more walks than ever. One day last week when there was summer temperatures in Stockholm I went home from the office at 3 already and the first thing I did when I got home was to take a walk in the upscale neighbourhood of Östermalm in central Stockholm to capture some favorite spots of mine. I started at the famous square Stureplan where many clubs are located and also the chique galleria Sturegallerian. If you want to do people watching this is the place to be. If you like sushi I can recommend a bite at East or if you would like to mingle and eat great meatballs Riche is the place to be. Also Taverna Brillo is a good place if you are going for afterwork drinks and bites. So let’s start there. This place is filled with spots for food, drinks and socializing.

With over 70 000 inhabitants in this neighborhood also green spots are a vital part of the infrastructure. Humlegården is the biggest park and here you find runners, dog walkers, kids at playgrounds and people sitting on the grass. I love all the green areas in this part of the town and although I am not a regular visitor to this park I sometimes end up there while doing interval training with running clubs. If you like libraries you can visit the National library of Sweden. A perfect place to sit down to work or study at. I always enjoyed going to libraries especially old ones and this is not an exception. 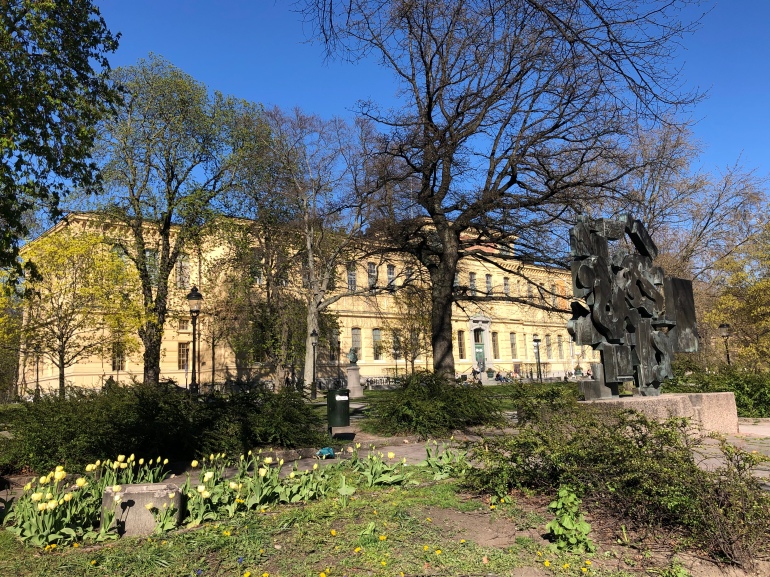 If you are looking for local specialties you can always go into the market hall and grab some or sit down having something to drink. Around the market you also find a stores, gyms, hairdressers and yoga studios. This is the center of Östermalm although it is not that hectic that the city center itself. 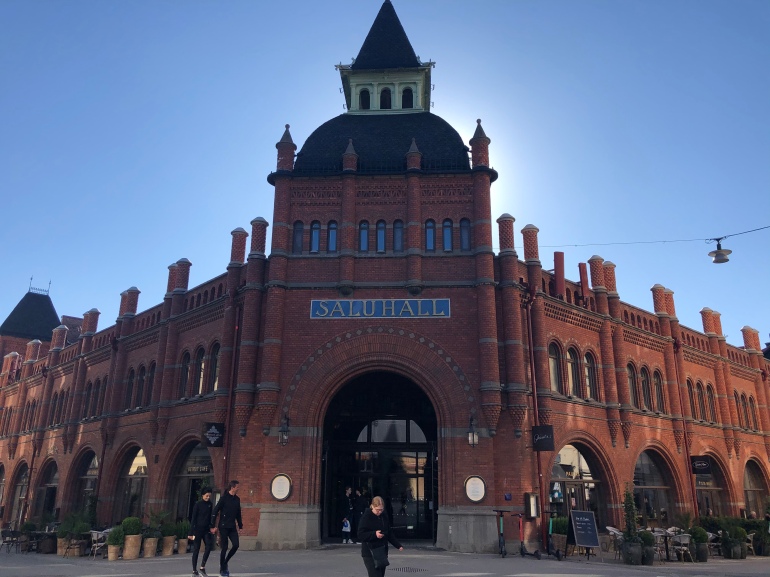 The neighborhood is rich in cultural highlights. Many museums such as the Army museum, the Swedish history museum and the Swedish museum of performing arts you find here. I havn’t been to them but it’s on my list. Also the beautiful Royal opera house is located in this part of the city nearby Nybrokajen. Here you will notice hoards of sunseekers sitting on the stairs during the spring. 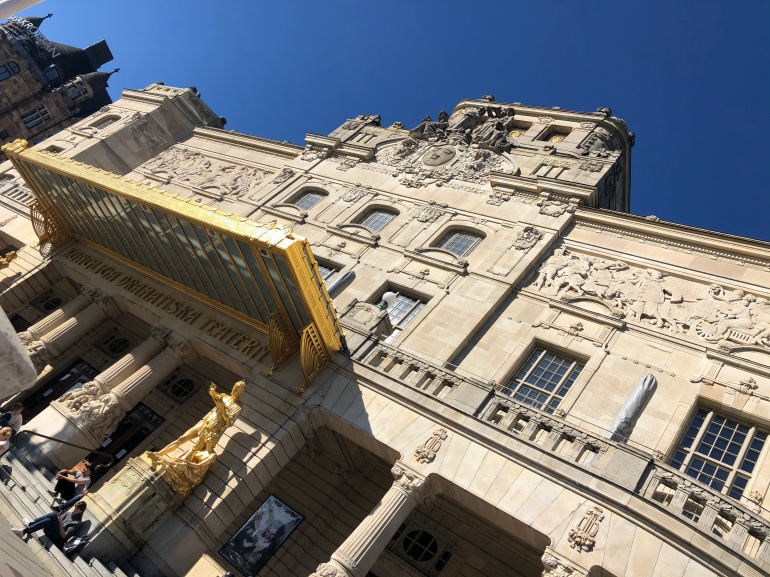 And churches. In this part of the city you find many old and well preserved ones. I’m not that much fan of entering each and every church but the buildings often impress on me so I gladly watch them from outside. Below you see Hedvig Eleonora church. 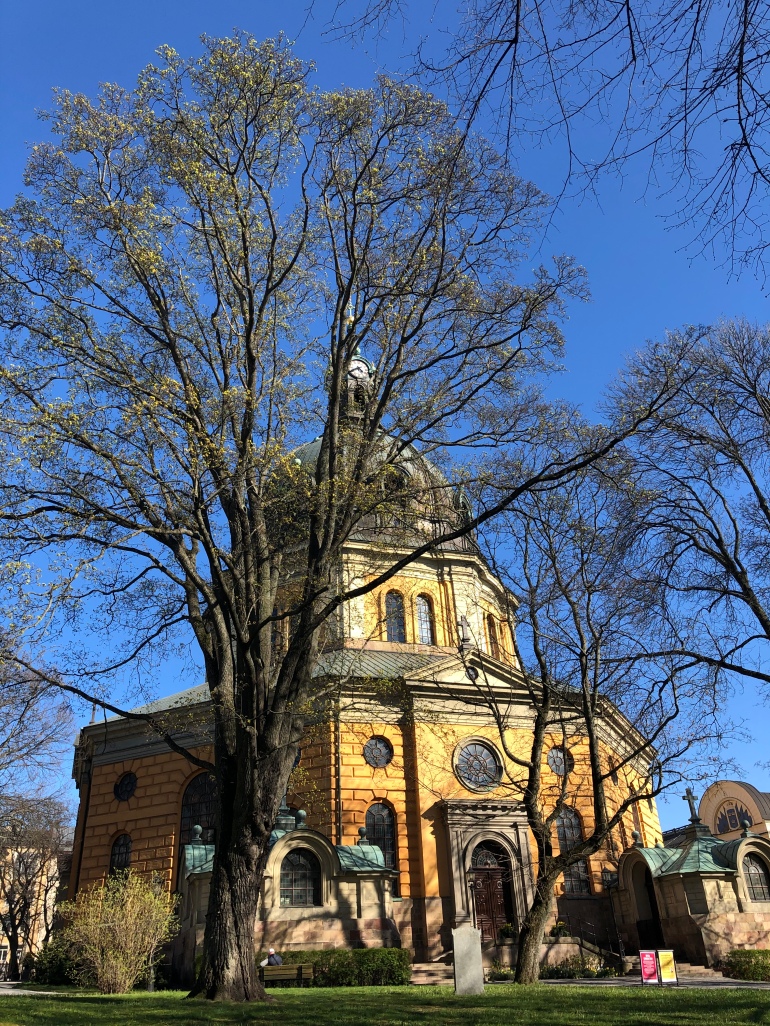 One of my favorite walks in Stockholm is from Nybrokajen to Djurgårdsbron. There is always something going on along this kilometer long walkingpath and if you intend to take a boat out in the archipelago you can in most cases do it from here. It is a beautiful place filled with people. Of course many tourists but also locals. 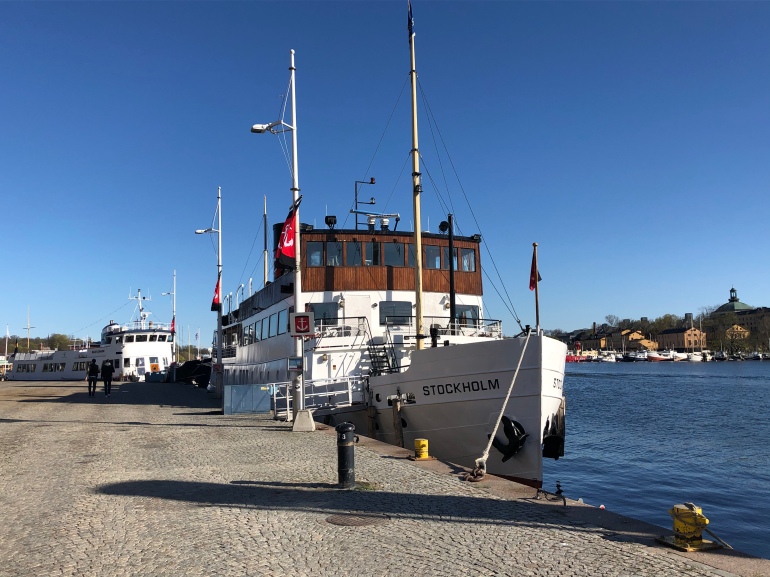 Since the population is like a mid-sized Swedish city in this part of town there are of course many flats to be found. Most of them was built in the 19th century but there are also newer mixed in. You just need to walk one street from the major ones and you will find a calmness if that is what you are looking for. While exploring a new city I always think it is interesting to find out how the locals live and by walking around in this area for a while you will for sure get a glimpse of the local life. 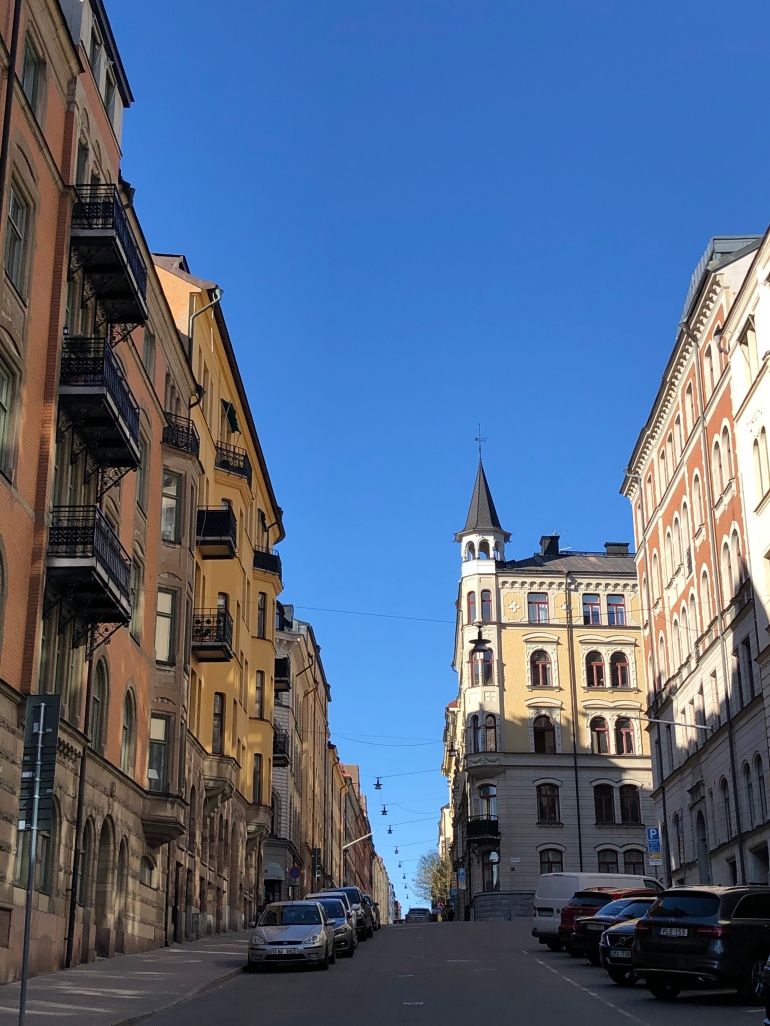 If you rather would imagine how the local life was in the 19th century you should head towards the corner of Styrmansgatan/Storgatan where you first find an old pharmacy, Storken, and on the opposite side of the street a cute park with houses from that era. 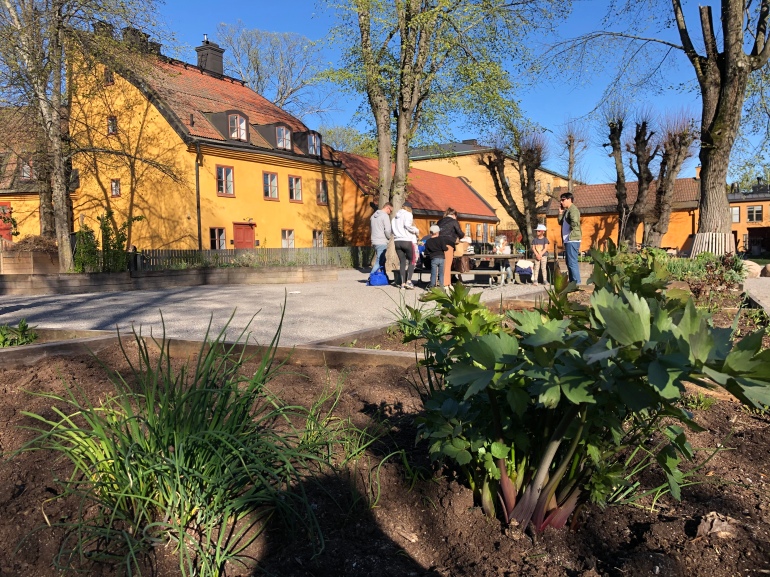 Then you might have seen enough and you can take a stroll back along Karlavägen. That is a walkway you shouldn’t miss out. It’s nothing super special but it is great for peoplewatching. 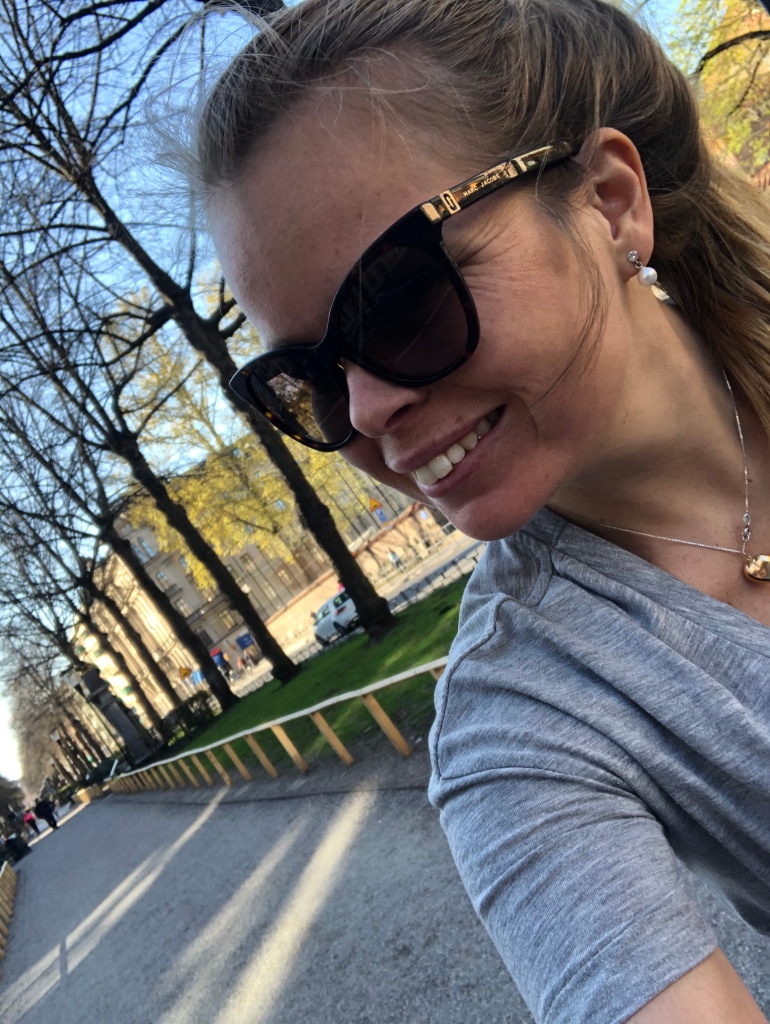 At the end of it near Humlegården you will find the below coffee shop and flower shop. Isn’t it the cutest one you have seen? just because its cuteness I sometimes stop by and buy something. If you look for instafriendly spots. This is one you can’t miss out. 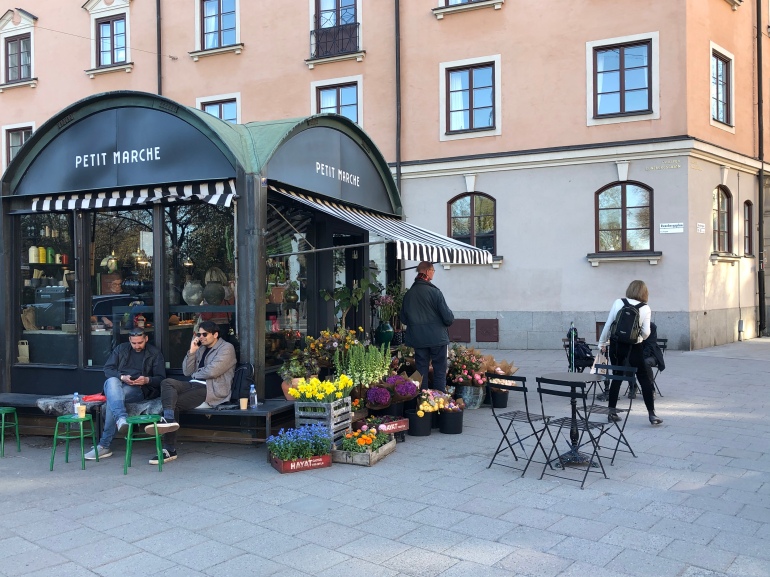 Officially Östermalm has a lot of green land since both Djurgården and North of Djurgården belongs to the area but since those parts deserve their own themed posts of “Travel Tuesday” I will only mention them this time. Instaed I would like to mention the green area just behind the KTH Royal instituate of technology. There you can take a walk or go for a run in a hilly urban forest. If you are looking for some hill training you can easily get exhausted there. Or by watching sports or play yourself at the Olympic stadion just nearby. 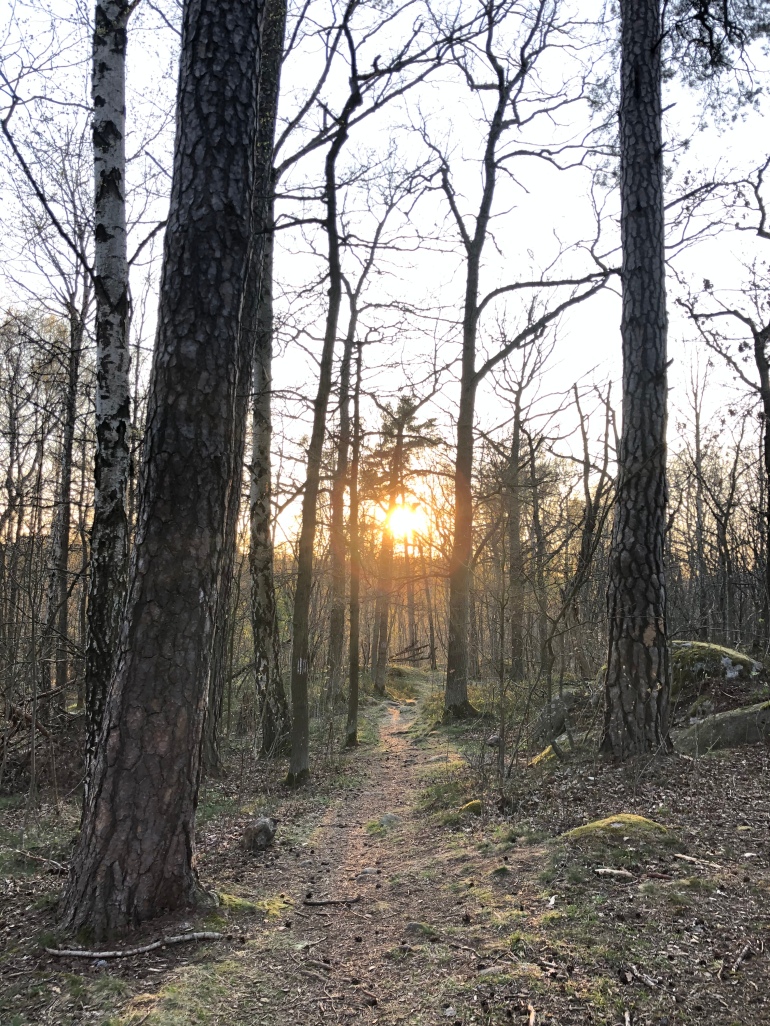 Sum up of Östermalm

Doesn’t it feel like a whole city captured in a neighborhood? It does at least to me. This is definitely an area of Stockholm where I could live at if I wanna live in the city center, pretty similar to my own one though but still. What do you think? like it or not? 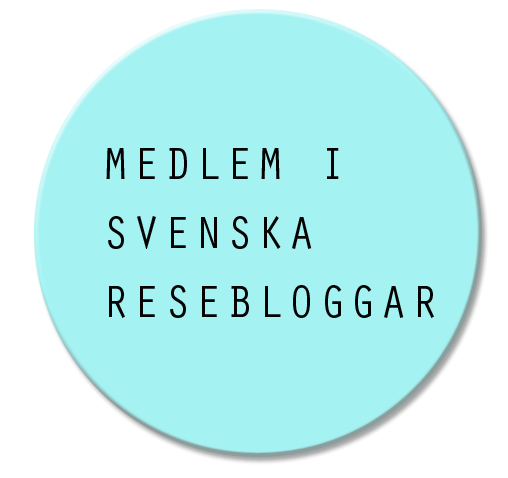