Not to mix up with Air China, I was flying China airlines, the national airline of Taiwan when I traveled from Denpasar in Bali to Taipei in Taiwan. It is a big airline with 87 aircrafts, mostly wide body aircrafts and a member of Sky Team flying to 102 destinations. Their main competitor at the market at home in Taiwan is Eva air that you might have heard of – I call it the “Hello Kitty airline” since they have striped many of their aircrafts with Hello Kitty figures. In Denpasar we got welcomed to the gate by two paper dolls. I suppose you are interested in airline reviews since you have read this far so here comes the full story of my first flight with China airlines. Ready to take off?

The flight of the day from Denpasar to Taipei was carried out by an Airbus A330 consisting of two classes. One business class and one large economy class. I was holding an economy class ticket for this 5 hours journey. It was around 150 persons booked on the flight so plenty of room to relax. In the European old-fashioned way paper newspapers were handed out upon boarding. I grabbed one english paper from the trolley and walked to my place just over the wing.

The cabin config was 2-4-2 in the main cabin like always in an aircraft of this type. The seats were pretty old of heavy weight model but although very comfy and well maintained. I could not spot any deficiencies at any of the places I were sitting. I got a window seat where I sat during takeoff and while eating but then I moved to the middle road to kill a few hours with sleep covered with fleece blankets. I used three or four blankets since I love covering up while sleeping. Anyone else who does?

The seat itself were very basic but comfy. It felt like a couch and not like a bench like Qatar airways cushions does in their new Boeing 787. I definitely do prefer comfy over style. Do you like old aircraft seats or new ones more? 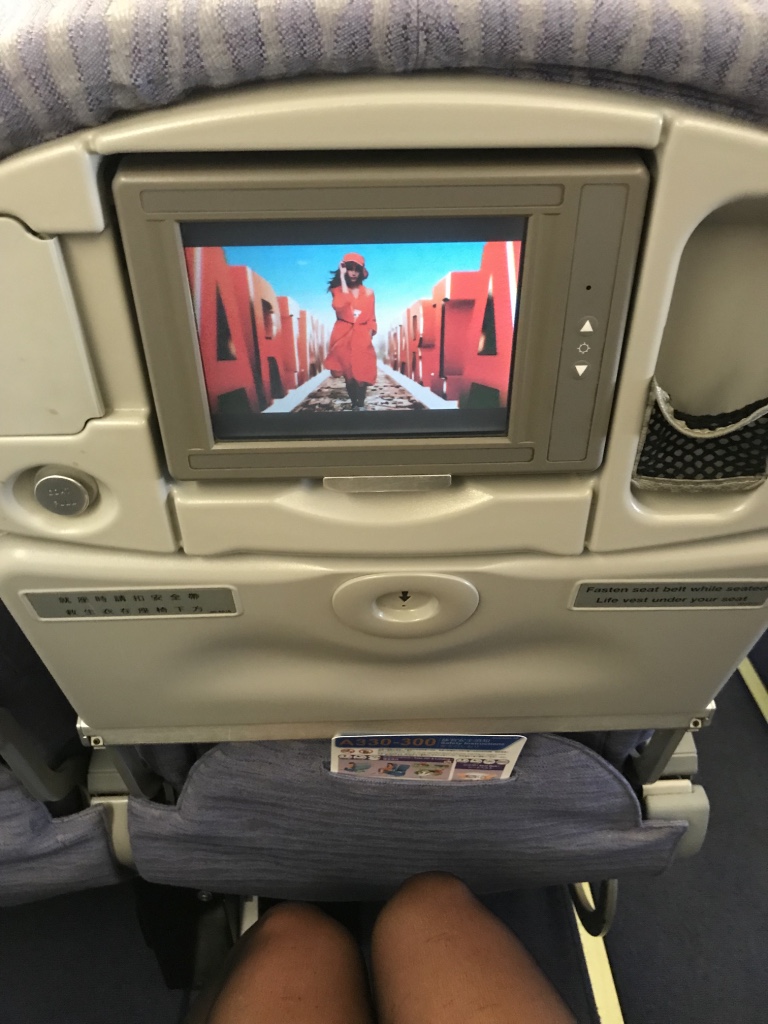 The IFE system was very old. I wasn’t watching any movie on it but turned on the moving map as soon as I got seated. I like to have a view of that so you know where you are if you look down. It looks like the legroom is very narrow since my legs are touching the seat infront of me but that isn’t the real deal. I was just leaning down while taking the picture and my chubby legs where touching the seat pocket.

If you would like to have a culinary experience then you should go with Garuda if you are heading out from Denpasar. China airlines did at least on this flight not offered any entertainment in terms of food. Just after takeoff we got drinks and snacks. Perfect since it was around 4 pm and I only had breakfast before. I asked for wine but got almost nothing. Asked again and when I begged about it I got a full glas. Maybe they thought I was an alcoholic? In Asia you doesn’t get served an European glas of wine, more like a shot sized wine. And of course you got some snacks. These kind of Chineese snacks are not my favorite but I was hungry so I ate it waited for the food to come. But I waited. Waited and waited.

Waited another hour and went to sleep. But no food. Then when I woke up I was not hungry anymore. I finished my book and then the food trays started to be served in the cabin. About one and a half hour before landing. It was the first time I saw this kind of service concept. Usually foods and drinks are served right after takeoff no matter of how long the flight is just to have it done. But not here.

And to be honest, it was not a delicious meal that came in. Two eatable things out of five. The cake and fruit. I am not a fan of Chineese food and especially not on aircrafts. It is often too oily and greasy. When the tables were cleaned up it was time for landing in Taipei. I was really excited to be back after 11 year so I almost ran off the plane.

If you are coming from Europe you as per today fly with China airlines to Taipei from Frankfurt , London and Vienna but they have plans to expand their European network. I could definitely fly with them again and they have a lot of new aircrafts although I managed to fly at an old one. Their business class at the A330 I flew looked also rather old but in they A350s and B777-300ERs they are very up to date and you could also book premium economy if you would like to. It is always fun to try new airlines but as said, don’t mix this up with Air China – one of the flag carriers of People’s republic of China.

Anyone who tried China Airlines? Or do you not fly anymore due to climate reasons?